What is Auger Electron Spectroscopy (AES)?

The sample is bombarded with an electron beam of sufficient energy to create core level ionizations, leaving a hole in a specific electronic shell. Recombination occurs by filling the hole with an electron from an outer energy level. The released energy is carried outside either by an X-ray photon or another electron from the atom, the Auger electron. Like for X-ray emission, the energy of the Auger electron is characteristic of the atomic element and does not depend on the energy or kind of excitation used.

The sample (gas or solid) is bombarded by a focused electron beam of 3 to 10 keV energy. The energy of the emitted electrons is analyzed by a highly sensitive energy analyzer, in which the filter energy (so called Pass Energy) is scanned over the Auger lines and the signal is detected using an electron multiplier. The measured energy distribution is digitalized and displayed by a computer program. Data are saved in various formats for processing and quantification.

The minimal configuration is an electron gun of 3-10 keV energy and an energy analyzer. The best design is to have the electron gun built into the analyzer. Modern analyzers have a selectable energy resolution and large working distance (offering good sample clearance). The STAIB ESA-family is optimized for AES and provides the most advanced compact analyzer design on the market.

An X-ray source producing quasi-monochromatic radiation (using Al or Mg anodes) is used to generate photoelectrons of different energies. The energy of the emitted electrons is analyzed by a highly sensitive, high energy resolution energy analyzer. The filter energy is scanned over the photoelectron lines and the signal is detected using an electron multiplier. The measured energy distribution is digitalized and displayed by a computer program. Data are saved in various formats for processing and quantification.

The minimum configuration requires an X-ray source and a high resolution energy analyzer suitable for XPS. The X-ray source is equipped with two anodes, Al and Mg, delivering different photon energies so that the photoelectron lines can be differentiated from the Auger lines (at fixed kinetic energy). Modern analyzers have selectable energy resolution and large working distance (good sample clearance). Having the electron source built into the analyzer provides ease of use and alignment, with full AES capability on a single flange. The STAIB DESA- family is optimized for XPS and AES.

What is Electron Energy Loss Spectroscopy (EELS) and REELS?

This method refers to the measurement of specific energy losses suffered by a Primary Electron (PE) traveling through a surface or inside a solid target. All interactions belong to elementary excitation in solids that theoretically describe quantified interactions of the PE with the solid bulk and surface. Each kind of interaction has its own energy, meaning that the PE will lose a characteristic amount of energy for each excitation, which is the basic feature of EELS.

The most common interactions are:

There are two different ways to measure energy losses, and their results are very different: 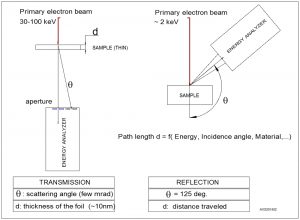 The following figure shows two possible configurations, for transmission and for reflection. The incidence angle is normal to the surface in transmission, but it can have any orientation in reflection. An interesting geometry is using a high energy PE beam at grazing angle to the surface (RHEED geometry) and a RHEA analyzer.

Although both techniques generate similar excitations, they differ by the fact that in transmission by choosing proper sample thicknesses the background of electrons scattered inside the target is kept very low as compared to energy loss intensities. In contrast, all electrons in reflection mode must be scattered by a large angle. Therefore a larger background of scattered electrons is added to the energy loss signals. Fortunately, this background is negligible for energies near the PE energy. Thus, Characteristic Energy Losses (CEL) like plasmon and band transition can be well measured in reflection mode whereas the larger loss energies corresponding to deeper core level excitation will be superposed to a large background of scattered electrons.

The dominant CEL structures measured in reflection are Plasmons, low energy ionization levels and band transitions. The corresponding loss energies do not depend on the atomic number Z but are governed by the outer shell structure of the solid, thus making CEL very sensitive to the chemical environment of surface layers.

What is EELS / REELS?